Johne’s disease is a chronic infection with a lengthy sub-clinical phase where the animals can have disease but do not show any outward signs. This ‘silent’ stage can persist for several years prior to the development of clinical disease. The triggers for sub-clinical disease progression to clinical disease are poorly understood. In addition, current diagnostic tests are best at detecting disease only after  animals shed the bacterium in faeces, by which time  the disease has already spread to the rest of the herd or flock.

When exposed to the bacterium that causes Johne’s disease (Mycobacterium avium subspecies paratuberculosis) the animal responds by activation of immune cells in an attempt to destroy the bacterium or to contain the infection. Immune cell activation can be detected by traditional tests such as the antibody ELISA or by newer methods which detect changes in gene expression which occur within the animal’s cells.

We are evaluating gene expression changes in both cattle and sheep with Johne’s disease. To do this we have used microarray chip technology which is a tool for detecting the expression of thousands of genes in a single experiment. A comparison of samples from healthy animals and animals exposed to the bug provides an overview of gene expression patterns in response to infection. Using a developed integrated approach we have identified groups of genes that are associated with defined clinical outcomes in both sheep and cattle. We have identified the involvement of previously unknown molecular pathways (cholesterol homeostasis, calcium homeostasis and anti-bacterial defence mechanisms). 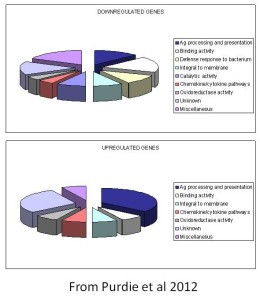 As the host’s cells react to the presence of a pathogen, some immune cells (antigen presenting cells such as monocytes) are able to present components of the bug (antigens) to enable other immune cells (T and B lymphocytes) to become activated. Other researchers have shown that one mechanism the bug uses to remain undetected is to suppress antigen presentation by what are known as MHC class II molecules. We have shown in cattle exposed to the bug that in addition to this decrease in expression of MHC class II molecules there is an increase in the gene expression of MHC class I molecules. This has major implications for our understanding of disease pathogenesis and future vaccination strategies.

This work is described in:

From other analyses of the microarray studies, a model of potential pathogen-host interactions involving novel pathways has been developed which indicates an important role for host lipids in mycobacterial survival and persistence in the pathogenesis of the disease and has provided information for the development of potential diagnostic tools utilising panels of genes.

This work is described in: